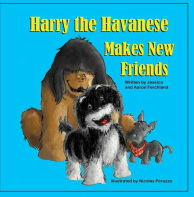 Harry’s best friend Mole is taking a bath and Harry is lonely. He decides to go to the puppy park to make new friends. When Harry sees all the dogs running  and playing, he feels too shy to join in. Will he ever make new friends? 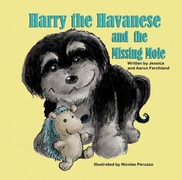 Harry the Havanese and the Missing Mole  (Book 1)

This is Harry. He’s a Havanese. His best friend in the whole world is his stuffed hedgehog, Mole. When Harry wakes up one morning to find Mole missing, he finds himself on the  hunt for his         friend. Will Harry be able to find Mole before the sun goes down?


Harry the Havanese and the New Puppy  (Book 3 Coming soon)

There is a new puppy in the house. He eats Harry’s food, plays with his Mole, sleeps     on his blanket, and copies everything Harry does. With all the attention being given     to the new puppy, Harry isn’t so sure he wants to be a big brother. What will Harry     do?

Pip is getting bigger. He is able to run, jump, and play with Harry and
his friends. But something funny is happening to Pip…He has a loose tooth!                     Can  Harry, Buxley, and Bear help Pip with his wiggly, baby tooth? Will they make it in     time for the tooth fairy?